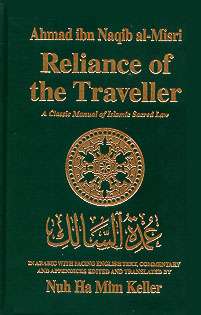 This is a follow up to a recent blog post about Nuh Ha Mim Keller’s translation of the Reliance of the Traveller.

In it I gave a link to a copy of the PDF version of the Reliance on Archive.org which has since gone down, leaving an error message about missing metadata files. That sounds like a technical fault but Archiv.org have not responded to queries and some people who are familiar with the Reliance had predicted it would not last long.

Over the last two or three years I can think of at least three copies of the PDF which have disappeared from the internet. One hosting site left the explanation that the copyright holders were threatening legal action. It seems likely then that the Archiv.org copy, which was the last version left, has joined the list and will not be reappearing any time soon.

Moreover, an Islamic book site left a curious message against the entry for the book:

What does he mean by a better translation? There certainly are those who question its accuracy. In his book The Third Choice Mark Durie gives examples of Keller putting a deceptively positive spin on items in the text, eg:

“Keller reports that a ‘non-Muslim may not enter the … Haram’ (the sacred precinct in Mecca). What the Arabic actually says is ‘idolater’ (mushrik) (o11.7), which is a more offensive term.”

Perhaps Keller regretted misleading Western readers by softening the text and wishes to put things right. Perhaps, but more likely he just realised that his book, giving such a clear view of the horrors of Islamic Law, is more useful to the counter jihad side than to the fellow Muslims he wrote it for, and simply wants to remove it from critical eyes. This could be a rare example of an Islamic apologist no-platforming himself.

IMHO the three most crucial books for helping non-Muslims get to the core of Islam are, in order:

1.  The Koran, of course. This presentation graphically shows Mohammed’s progress from disregarded prophet in Mecca to all-conquering warlord in Medina (Allah remains the same sadistic ogre throughout though).

2.  Alfred Guillaume’s The Life Of Muhammad, the translation of ibn Ishaq’s biography detailing Mohammed’s use of robbery, assassination, rape, torture and genocide in his drive toward power. And ibn Ishaq was a fan!

3.  The Reliance of the Traveller. According to the great scholar Joseph Schacht Islamic law is not merely one aspect of Muslim civilization but “the epitome of the Islamic spirit, the most typical manifestation of the Islamic way of life, the kernel of Islam itself.” There are translations of other manuals of Islamic law, such as the Hedaya and the Risala, but neither are as clear and so cannot take non-Arabic speakers into the kernel of Islam like the Reliance.

And now the familiar PDF, basically a scan of the book, has disappeared from the internet. This is a huge loss to the counter jihad community who quote it liberally.

Except….it’s not quite gone. Recently two different transcriptions have appeared:

one in PDF format again
and
one as a WordPress site.

[Oh no! Both of these have now gone too]

They both have their advantages. The PDF version allows the reader to jump from entries in the tables of contents to the relevant sections. The WordPress version is easier to copy text from.

Hopefully other presentations will appear on other platforms, constantly replacing those which are closed down…as they will be. Probably we can look forward to an indefinite game of whack-a-mole with Keller as the whacker and enterprising counter jihadists as the moles. Good luck to us all. Let us keep the Reliance out there for the benefit of those who have not yet discovered what Sharia Law really means, and remember to keep our heads down.

[UPDATE] Since this blog post was written two new copies of the original PDF have appeared:

[And both of these have also gone. If you come across any other versions please let me know.]

9 thoughts on “The mysterious disappearing Reliance”