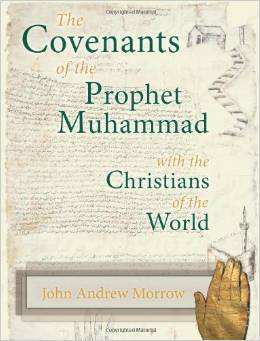 A couple of years ago I wrote a blog post, Mohammed’s apocryphal Covenants, about John Andrew Morrow’s book The Covenants of the Prophet Muhammad with the Christians of the World, finding several reasons to doubt the covenants’ authenticity. Concentrating on the most famous and best documented one, the Covenant with the Monks of Mt Sinai, I found two startling anomalies arising from the timeline.

According to Dr Morrow the Covenant with the Monks of Mount Sinai was written in 623 AD but Sinai did not come under Muslim control until c.640 AD, several years after Mohammed’s death.

So:
Anomaly #1 Why would Mohammed grant a covenant of protection in 623 AD to a group who were not under his control and he was therefore not in a position to protect?

Anomaly #2 Why would he release them from the obligation to pay the Jizya tax which they were therefore not subject to?

But there is an even more glaring anomaly, one which I only just realised was staring me in the face.

According to Dr Morrow’s own translation, the Covenant with the Monks of Mt Sinai was written “on the third of Muharram in the second year of the Prophet’s Hegira”. Since Muharram is the first month of the Islamic calendar, that means it was written less than a year after Mohammed took up residence in Medina. By that time Mohammed had not yet fallen out with the other religious and tribal groups in Medina. In fact the only substantive thing he is reported to have done in his first year was to set up the Constitution of Medina which gave equal rights and responsibilities to Muslims and non-Muslims.

Dr Morrow tells us “The Constitution of Medina decreed that the citizens of the Islamic State were one and indivisible regardless of religion. Be they heathen, People of the Book, or Muslims, all those who were subject to the Constitution belonged to the same ummah. In doing so, he created a tolerant, pluralistic government which protected religious freedom.”

Jizya, the discriminatory poll tax imposed on subjugated non-Muslims, only came later, during Mohammed’s wars with the neighbouring People of the Book and polytheists (the first reference to it in the Koran comes in verse 9:29, revealed c.630 AD). Not only that but on p.94 of Dr Morrow’s book he specifically states, in another context “…the jizyah did not exist in the early days of Islam”.

So:
Anomaly #3 The Jizya tax which the Covenant exempted the monks from paying did not yet exist, even in Medina.

To sum up, Mohammed’s Covenant with the Monks of Mt Sinai, supposedly written in 623 AD, promised protection to a group that Mohammed was in no position to protect, and exemption from paying a tax which they were not subject to, and which did not even yet exist.

I would say all that means that the Covenant could not possibly have been written in 623 AD and must therefore be a later forgery (presumably perpetrated by Christian monks hoping for relief from their Muslim overlords). If anyone can provide another explanation for these 3 anomalies, not involving time travel or precognition, I would be grateful to hear it. Dr Morrow certainly does not address any of them in his book. In the meantime I maintain that the claim of authenticity for the Covenant with the Monks of Mt Sinai is just plain nonsense.

Why does it matter? Because along with the book goes a Covenants Initiative, the aim of which is to spread the acceptance and influence of the Covenants in hopes of improving relations between Muslims and Christians. A laudable aim no doubt, but if its main foundation is a forgery then the Initiative amounts to no more than wishful thinking leading to an unrealistic assessment of the man who confronts us today just as he has for 1400 years.

I encourage readers to compare the picture we get of Mohammed from the Covenants, religiously tolerant and accepting, with the one we get from the Sira, a ruthless warlord by anyone’s standards. Unfortunately it is the Mohammed of the Sira, who is firmly embedded in Islamic tradition.

If the promoters of the Covenants Initiative can refute my objections then I will apologise and wish them well but, going by past experience, they won’t even try. The nearest thing I have been able to elicit has been some fairly inventive abuse from Dr Morrow. Perhaps you might have better luck.